The perceiving eye is weak.
The observing eye is strong.
– Miyamoto Musashi

It was the summer of 1615 in Japan. A desperate force of twenty to thirty men of the superior sixty thousand strong Tokugawa forces had broken into the Shogun Hidetada’s camp after days of attempting to breach the Osaka castle of the Shogun. Due to the surprise attack, the Shoguns men were thrown into disarray and the Tokugawa force found themselves within a short distance of the Shogun himself. 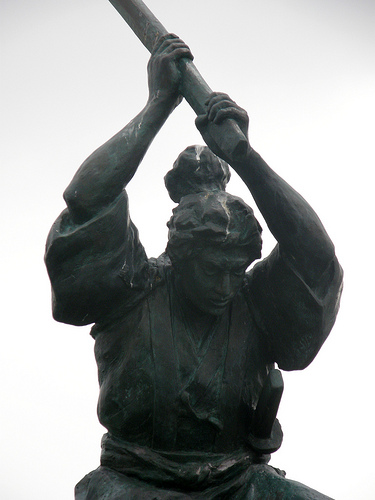 Between them and the Shogun stood Yagyu Munenori, a middle aged elite swordsman who was the personal instructor to the Shogun himself.

Despite the likely possibility of death Munenori had positioned himself calmly in front of the Shoguns horse. He had no thoughts of the outcome. No thought of what might happen if he died. No thought of the past or future. No thought of his incredible reputation. He was fully present. He lived at that precise moment with utter truth. No other time existed, except that which he was faced with now, and that any mental chatter would hinder any chance of success; or even his very survival. He projected an intense energy that almost electrified the air with his presence. It was this state that the Samurai called ‘ Mushin’ or no mind in which he could truly serve and truly perform by uniting the infinite intelligence that is uncovered by the connection of mind and body.

As the enemy approached him, Munenori unleashed his devastating ability with the sword demonstrating his skill, speed and grace. He single handedly killed seven of the enemy without receiving a single injury before calmly resuming his post and guiding the Shogun to safety. Shortly after this the castle fell to the Tokugawa force.

Munenori’s story demonstrates a state of presence and awareness of the highest level. A level that utilises the honed, focused power of the observing eye of the warrior.

The observing eye is only concerned with the truth of what is occurring at the time, it lives in the moment and sees life for what it is. It is a condition of alert mindfulness. It is a state of detachment but also of a connectedness with its surroundings.

The perceiving eye brings distraction through excess thought. It creates a picture of events distorted from the actual truth full of fear, setbacks, impossibilities and exaggerations. It brings the past and the future to every situation. It may even bring an exaggerated ego to a situation, hoping to fool others of its importance and to hide the weakness within. It creates separation from others and blocks the connection of mind and body.

The observing eye is the only state that can truly serve. Whether this is for personal creativity, a physical craft, coaching others or even running a country. It dissolves an over egotistical state of self importance so that it may reach out and really listen. Really feel. It is capable of great compassion because it creates an energy and awareness that is far greater than its own existence.

To really see is to feel the pulse of life within and around us exactly as it is.

To be really blind is to see only our own wants and desires separate from everyone and everything else.

This month we are about to launch the groundbreaking course ‘The Healing Mind’ at our full time premises set within beautiful countryside in Sevenoaks, Kent. It is a life changing course that has transformed the lives of hundreds of people It is the first of its kind to cover how our … END_OF_DOCUMENT_TOKEN_TO_BE_REPLACED