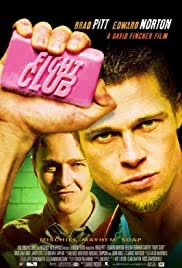 Ok I know this film has been around for a while (1999) but I would like to take another look at David Fincher’s Fight Club.

Brad Pitt and Edward Norton give incredible performances in this cult classic based on the novel by Chuck Palahniuk. The film focuses on the character Tyler Durden, who believes life isn’t about self improvement but self destruction that makes life worth living.

Putting aside the graphic fight scenes that even show the physical facial after effects of a fight, (something Hollywood never ever does) there is truth in this idea of self destruction.

Self improvement is in self destruction.

That image we carry around in Job titles, roles, possessions and anything else to impress others and fit in, can become the weight around our neck. We are so busy becoming something, we lose the ability to see who we really are.

Some of the Tyler Durden lines in the movie ring with truth.

“What we own ends up owning us.”

“You are not your job, you are not how much money you have in the bank or the the car you drive. You are not the contents of your wallet.”

There are many great lines in this movie and it covers the societal image we create and is expected of us by others. It also covers fear, ambition, consumerism and much more. Not surprisingly, Fight Club has gained a following from those interested in Stoic philosophy. Letting go of everything is a major theme throughout. I really recommend another look at this film but it is extremely violent.

Maybe next time I will cover a Disney movie for balance.

Having a fixed image of ourselves that’s tied to what we do, what we own and the roles we have in life is an inevitable route to suffering. Our own sense of ego loves and flourishes in the labels we have of ourselves.

This is true of the violent criminal, the victim mentality which is the theme of modern society and the ruthless businessman to name a few.

They are all identifying themselves with their image and the thoughts and emotions that come from these. Seeking death in life is not a physical death but the death of the image we portray.

I cover it in this weeks podcast and it’s called ‘Seeking Death in Life'.

“Each of us has an image of what we think we are or what we should be, and that image, that picture, entirely prevents us from seeing ourselves as we actually are. "

I really like this video featuring Jim Carey and it’s worth watching several times. It has lots of inspiring nuggets to take in but the best line is this one:

You can view the whole video here: https://youtu.be/_-kaib_rXTQ

“Can I practise Yoga alongside my counselling for anxiety?”

This question indicates how we often believe one treatment is sufficient to get well or how we shouldn’t combine them so we know which one worked.

This question is actually the wrong way round.

Anxiety is a condition of both mind and body and can be related to diet, stress, childhood and other factors.

A recent scientifically proven USA study showed that classes like Yoga and the excellent self healing art of Chi Gung, are far more effective than dialogue therapy. In fact dialogue therapy applied on its own, didn’t make any of the top five approaches for treating trauma, pain, depression, anxiety and emotional stress.

So Yoga, Chi Gung and meditation are the first port of call for either depression or anxiety. Conventional dialogue therapy is secondary. If you find a really good teacher, they can deliver both at the same time in the same class.

This month we are about to launch the groundbreaking course ‘The Healing Mind’ at our full time premises set within beautiful countryside in Sevenoaks, Kent. It is a life changing course that has transformed the lives of hundreds of people It is the first of its kind to cover how our … END_OF_DOCUMENT_TOKEN_TO_BE_REPLACED