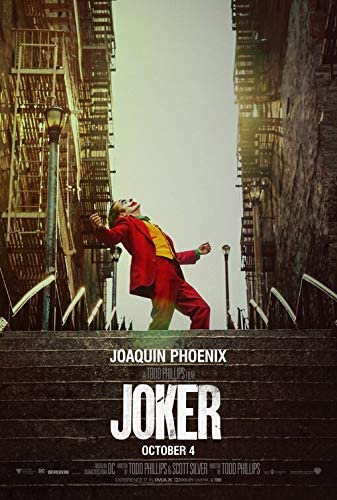 Joaquin Phoenix gives an epic performance as he takes his turn as the role of Batman’s enemy ‘The Joker.’ In my opinion, it is the definitive performance of the role and it could easily be a movie not even connected to Batman or the Joker and simply be a portrayal of one mans descent into madness.

The movie has gained attention from many Psychologists, such is the power of the performance and journey of the main character, who reaches that point where he fully believes there is no other option but to embrace his darkest shadows.

I know many people who have given this film a miss because they are not into Batman or superheroes but the film is devoid of this element anyway and focuses entirely on the life and mind of the man who becomes the Joker.

I recommend this film. There are elements of this characters journey that many of us have felt at times. Feelings of despair, anger, rage and worthlessness that tend to accompany life’s toughest challenges. If these feelings are interpreted as the world is out to get us and is a vicious, dark, threatening dog eat dog environment, a character can embrace a mindset that mirrors these feelings towards those around them.

It is a powerful rare movie that stays with you after the closing credits.

This week take a look at a short video I like called:

‘The Story Of The Chinese Bamboo Tree.’

A good story to remember in an age of instant gratification and results.

“You cannot ask the darkness to leave, you must turn on the light.”

This book is a short read which can be completed in an afternoon. A perfect holiday read, which is exactly when I read it, during a recent short break to Cornwall. I really enjoyed this book and despite the title, it is a guideline for living life in our personal endeavours and relationships as well as work. It is a parable about serving others, cause and effect and the power of giving.

As a coach, I have met and know many financially successful parents who have caused great pain for their families and in some cases lost contact with them completely, through applying getting what they want instead of giving and considering the needs of others. The book rightly challenges this win at all costs mindset and explains a much better alternative that enriches the lives of everyone.

“Why do parents miss their own children’s pain?”

During the same short break in Cornwall, I got asked this question in the hotel we were staying. It happened during typical hotel chat, where people ask you what you do. What was interesting during this chat with two Grandparents is how self harming, medication, depression and anxiety are being normalised in children. There is obviously nothing normal about this but normalising it, creates a diversion, a smokescreen that creates a convenient confusion where no one really has to take any responsibility because it is so widespread.

The second reason is that most parents are disconnected from their children. Which is why children share their feelings with others and not their parents. One of the most ridiculous comments in modern times is ‘You are too close to be able to talk to your child about their feelings.’ The fact is, it is because parents are not close to their children that they go elsewhere to be heard.

I will finish with a wonderful quote by Anne Lamott:

“The most profound thing we have to offer our own children is our own healing.”

This month we are about to launch the groundbreaking course ‘The Healing Mind’ at our full time premises set within beautiful countryside in Sevenoaks, Kent. It is a life changing course that has transformed the lives of hundreds of people It is the first of its kind to cover how our … END_OF_DOCUMENT_TOKEN_TO_BE_REPLACED